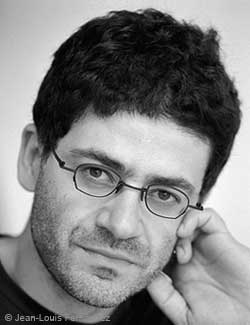 Born in 1968, author, actor, and director Wajdi Mouawad spends his early childhood in Lebanon, his adolescence in France, and his young adult years in Quebec before settling in France, where he now lives.

He studies in Montreal, at the École nationale de théâtre du Canada, and is awarded a diploma in performance in 1991. Upon graduation he begins codirecting his first company, Théâtre Ô Parleur, with actor Isabelle Leblanc.

During this time, in 2000, he assumes the role of artistic director for the Théâtre de Quat’Sous in Montreal, a position he will hold for four seasons. He and his French company, Au Carré de l’Hypoténuse were associate artists at l’Espace Malraux, scène nationale de Chambéry et de la Savoie, from 2008 to 2010. In 2009 he is artist in residence of the 63rd edition of the Festival d’Avignon, where he stages the quartet Le Sang des Promesses. He serves as artistic director for the Théâtre français du Centre national des Arts d’Ottawa from 2007 to 2012. Since September 2011, he has been associated artist at the Grand T- Nantes.

His career as stage director began with the Théâtre Ô Parleur, as he contributed his own works to be performed: Partie de cache-cache entre deux Tchécoslovaques au début du siècle (1991), Journée de noces chez les Cromagnons (1994) et Willy Protagoras enfermé dans les toilettes (1998), puis Ce n’est pas la manière qu’on se l’imagine que Claude et Jacqueline se sont rencontrés coécrit avec Estelle Clareton (2000). His career took a turn in 1997 when he wrote Littoral (1997) which he also adapted and directed for cinema in 2005. Following closely were Rêves (2000) and Incendies (2003), which he staged, in Russian, for the Théâtre Et Cetera in Moscow. Forêts appeared in 2006. In 2008, he wrote, staged and played Seuls. In 2009, he was entirely dedicated to putting together the quadrilogy Le Sang des Promesses, which included a new version of Littoral, as well the shows Incendies, Forêts, and a new work, Ciels. He composed the play Temps in 2011.

Wajdi Mouawad also wrote plays for youth, Alphonse (1996), Pacamambo (2000) and Assoiffés (2007), as well as novels: Visage retrouvé, (2002), and Anima (2012) (which was awarded the grand prix Thyde Monnier from the Société des Gens de Lettre, the award Phénix de la Littérature au Liban and the literary prize of the Deuxième Roman de Laval, amongst others).

A trained actor, he played characters in seven of his own works, as well as acting under the direction of other artists, for example with Brigitte Haentjens in Albert Camus’ Caligula (1993) and Dominic Champagne in Cabaret Neiges noires (1992). More recently, he played the role of Stephan Federov alongside Emmanuelle Béart in Camus’ play Les Justes directed by Stanislas Nordley (2010).

He never shied away from the oppotunity to explore other worlds as a director, such as Voyage ou bout de la nuit by Céline (1992), Shakespeare’s Macbeth (1992), Irvine Welsh’s Trainspotting (1998), Oedipe Roi by Sophocles (1998), Six personnages en quête d’auteur by Pirandello (2001), and Les trois soeurs by Tchekhov (2002).

Concurrently he is writing and directing a new work in which his explores familiar themes, as he did in Seuls. The new cycle Domestique, begins with Soeurs (2014), and will soon be followed by Frères, Père and Mère.

Translated in more than 20 languages, the works of Wajdi Mouawad have traveled the 5 continents, being produced and presented in theatres around the world: Japan, Brazil, Korea, Scandinavia, Germany, Spain, Morocco, Britain, the United States, Mexico, Argentina, Australia, to name a few. Wajdi Mouawad continues make his mark on the world of theatre with his unique style and compelling voice, expressing the idea that «art witnesses human existence through the prism of beauty».