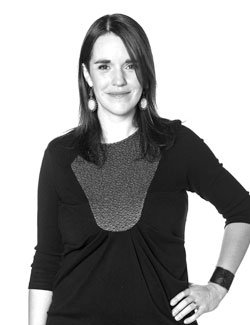 Patricia Ruel graduated in Set Design from Collège Lionel-Groulx in 1998. She has since then worked on countless theatre productions, television shows, awards ceremonies, festivals and special events as a props designer and set designer, both in Quebec and abroad.

In 2004, she created the props for the Cirque du Soleil show KÀ in Las Vegas, directed by Robert Lepage, with whom she subsequently worked on the operas 1984, presented in London in 2005, and The Rake’s Progress, produced in Brussels in 2007.

Patricia continues her collaboration with Cirque du Soleil under Dominic Champagne’s direction in The Beatles LOVE for which she designed the props. Wintuk (set and props, R. Blackburn and F. Rainville, 2007), VivaElvis! (props, V. Paterson, 2009), BananaShpeel (set and props, D. Shiner, 2010) and Amaluna (props co-designer with Scott Pask, D. Paulus, 2012), followed.  She also designed the props for Reflections in Blue, a show presented as part of the opening ceremonies of the FINA World Aquatic Championships in 2005, and for the 2007 XLI Super Bowl pre-game show. In 2016, she is the artistic director on Luzia.

For television, among others, she worked as artistic director for the canadian production of Dragon’s Den, and for three end-of-the-year specials, Bye Bye 2010, 2011 and 2013 aired on SRC. She received the Gémeau awards in the Best Set Design: all variety categories, magazines, public affairs, sportscategory for each one of her three Bye Bye.

After having completed the set design for The Nevada Ballet Theater’s production of The Nutcracker in Las Vegas in December 2012, Patricia worked as artistic director for Circo Jumbo, a Chilean and Peruvian circus production, and multiplied her collaboration with Moment Factory for important special events, such as Fun !at the GrammyAwards in 2013, or ForestaLumina  in Coaticook in 2014,ValleaLumina Whistler (Canada) and SakuyaLumina (Japan) in 2018, for example. She also, in 2018, was the artistic director for the latest Véronic DiCaire’s show, Showgirl Tour.

To learn more about Patricia Ruel’s work, in Theatre, Cirque, Television and Variety shows, we invite you to read the long version of her biography and cv using these links: Curriculum Vitae Biography – long version