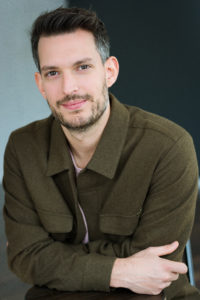 Holding a degree in scenography from Conservatoire d’art dramatique de Québec (Canada) since 2007, Sébastien Dionne quickly distinguishes himself on Canadian scene as costume designer. He has now designed over 50 productions mostly in theater but also in circus, contemporary dance, cinema and musicals, and collaborated for many special events.

With an artistic signature characterized by his Haute Couture inspired costume approach and a strong interest in period costume design, he’s especially renowned for his creations for major classical and contemporary productions, such as Hamlet, Macbeth, La Locandiera, La reine Margot, Les liaisons dangereuses or Jocaste Reine, which he instills a fair hint of modernity. For the last few years, he tends to include textile technologies and works closely with artisans in order to bring about a merger between their rich know-how and latest innovations.

Over the years, his work has been recognized many times and rewarded by the Prix des arts et de la culture de Québec, notably in 2011 and 2017 for best costume design.

To learn more about Sébastien Dionne’s work, in Theatre, Cirque and Variety shows, we invite you to read the long version of his biography and curriculum vitae using these links: Curriculum Vitae Biography